Link: (of a node) is the location or address of the next node.

Null: The last node of the linked list points to null (none) which indicates that it is the last node.

• Unlike arrays, elements in a linked list are not stored at contiguous memory locations.
• In an array, memory is assigned during compile time while in a Linked list, memory allocation occurs during execution or runtime.

• Linked Lists addresses some of the limitations of arrays of having a fixed size because Linked Lists are dynamic in nature.This dynamic nature allows memory allocation whenever required.

In a singly linked list, the node consists of one data field and one address field.

Representation of a node:

A doubly linked list is a data structure in which each node contains one data link and two link fields. Thus there is a pointer to the next as well as the previous node in a sequence.

It is a linked list which has no null values. It can be traversed from any node and in any direction.
The pointer in the last node contains the address of the first node of the list.
In a circular linked list, there is a need to define both the head and the last(or end) node.

2.3.Insertion at the nth position 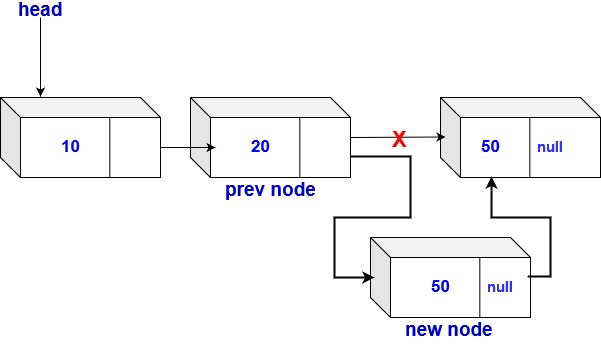 Steps
To delete a node from a linked list, the following steps are to be followed:

To update the value of the node, set the data part equal to the new value.